Posted on July 9, 2012 by carmengfarrell

This is a rainy day, two people out of three maybe coming down with a virus, kid-friendly comfort food dish.  Or so I thought.  A spaghetti sauce bottom is topped with a baked rotini and aged Gouda cheese topping.  This is what it looks like ready for the oven: 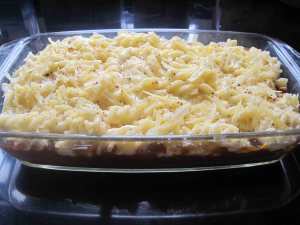 First the spaghetti sauce.  It works best if you wake up at 3:30am for some odd reason and think playing on Face book will help you go back to sleep.  Continue the spaghetti around 6:40 by driving your husband to the train station for his two day business trip.  Your memory of what happened in Milan is still quite fresh but you put your game face on and send him off cheerfully.  After the niceties of breakfast and morning toilette with your offspring, the recipe resumes at 10am, while you look at your two children and figure what to do in the rain, all day, in a suburb of a small city in the Netherlands.  All you really want to do it go to sleep but that is not going to happen.  Actually, you realize the lovely home that you’re exchanging needs a quick clean so you temporarily abandon the “what will be do today?” conversation in favour of vacuuming the house’s main floor which-too late-makes you realize how messy CERTAIN people who aren’t vacuuming can be…and it makes you a little grumpy.  But you regroup.

So, you think a trip to the grocery store and some sort of outing for the kids is in order.   Having a car is a novelty, so perhaps we will drive into town (Arnhem, the Netherlands) to the tourist office to collect some Intel.  Armed with the trusty GPS, the nice lady’s voice tells you to go various places.  If it weren’t for the picture, I’d be lost after the first corner since her pronunciation of Dutch street names is no better than mine and bears no resemblance whatsoever to what’s written on signs.  Example: how would you pronounce “hoedekenskerke”?  “Merkxstraat”?  GPS lady has no idea either.

At this point in the recipe, it is relevant to know that you only speak one word of Dutch…”thank you”…well and maybe “hello” because it seems to sound just like “hello” to you.  Here is critical information for your recipe to work:  all your ingredients must be collected without being able to understand any labels.  You only arrived the day before yesterday and other than the trip from the train station to the house, you have been out once (so you really don’t know where you are).

Again, for the spaghetti sauce, you will need eight eyeballs and four ears to hear your kids, the GPS, see the street signs, the street lights, other traffic, cyclists on their OWN road to whom you must yield, read (too late) that those letters on the street must mean “bus lane” which you’re in illegally, and maneuver to miss the major road construction that blocks your route the nice lady is now telling you she is “RECALCULATING” (I’d like to tell her what to recalculate) and then make a “ou” turn (WHY can’t she say “you” turn like the rest of the world????) and your daughter is starting to get anxious and you’re saying “don’t worry” while you drive up a one way street the wrong way and then have to smile and wave at the nice man in the oncoming car who looks rather annoyed.  Who wanted to go into the centre of town anyway??

So.  It seems the best thing is to pull over, re-program the GPS to take us to the neighboring small town of Elst, again, with the back seat commenting on everything.  If I were Danish I could drink, but it’s too early for me.  (Honest, in the Copenhagen airport at 7:30 am all the people at our neighboring table at the coffee kiosk poured little bottles of Johnny Walker into their coffee.  In cafes downtown, it wasn’t uncommon to see more than one person with a glass of wine by 10:30 or 11:00am).  But I digress.

Now remember, you haven’t forgotten about your recipe, even though your calm state of mind returns as you and your offspring drive on narrow, cute, country roads gazing over perfect pasture scenes.  The most beautiful brick barns I’ve ever seen.  Cattle, sheep, llamas, goats, free range chickens, u-pick (I think) cherries, apple orchards.  Green and lush.  Gorgeous.  And Elst is cute too.  90% of shops are closed on Mondays but that’s ok, my window shopping skills are honed from weeks of drooling on Copenhagen and Milan storefronts.  BUT, the most amazing cheese shop is open.  But it has to be a quick trip since your two children are taking WAY too many free samples despite your admonishments that you attempt to deliver with enough venom to stop them but not so much to scare the nice man who’s helping you and who speaks English. It’s not working and too bad, as I see he has a whole wall of wine and I’ve discovered unlike Denmark, wine is affordable again.  With his help, I leave with too much cheese, but smoked Gouda and two aged Gouda are satisfyingly heavy in my bag.  Walking down the street I am thinking what will I do with all this cheese?  Maybe I’ll make the kids macaroni and cheese.  But there’s the spaghetti.  Oh well, I’ll sort that out later, I think.

So, after a shared sandwich at a little bakery/café on Elst’s main street we head back to Arnhem and the grocery store.  Ingredients?  You will need ground beef.  What is “beef” in Dutch?  Ok, that’s my best guess.  Just hope it’s not pork.  Now for tomato sauce, is it “gepelde tomaten?”  “basis saus?”  Let’s get both, but please don’t let it be whole tomatoes because then my daughter won’t eat it.  And for the macaroni and cheese you need flour…is it “zelfruzend bakmeel?”  is it “tarwe bloem?”  And on it goes.  Meanwhile, your son is pushing the grocery cart under the “direction” of his older sister and it isn’t going well and you’re about to become a spectacle.  Probably we are already but at this point I’m past caring.  Let’s just get home…

Which we do.  The normal recipe is 1.5 lbs. ground beef, two chopped onions, 1 tbsp. white sugar, two whole garlic cloves, two or more whole dried red chilies, lots of tomato juice (48oz?), one can tomato sauce, one can tomato paste, salt and pepper.  Cook for 8 hours.  Today’s version is: some indeterminate amount of meat, two chopped onions, five or six garlic cloves because they look so dried out and I’ve realized there are no red chilies to be found, lots of pureed tomatoes, one can of whole tomatoes (things are REALLY going downhill now…daughter won’t eat it if she knows this), sugar, salt and pepper.

I now realize several things:  1. it isn’t going to taste like “my” spaghetti; 2. it won’t be ready for tonight (cook 8 hours?), so even though I STILL want to go to sleep I have to, 3. Make something else for tonight.  The macaroni and cheese.  I’ll make it with the Gouda that received the “daughter-seal-of-approval”.  But that won’t work either since THAT won’t taste like I normally make.  WHY, oh WHY did I think it was a good idea to try to make something familiar for the kids???  The spaghetti sauce is simmering by 2pm so I think I can spare some time in front of the computer.  That Face book thing was quite fun in the middle of the night and I admittedly get a little lost in it until I smell something.  Oh geez!

So then I have what I think is a flash of brilliance.  I’ll create a NEW recipe and it will be amazing because it will be Italian and Dutch (the cheese) which are the two countries so far I’ve had kitchens to cook in.  A casserole of “spaghetti” (burnt bits removed) on the bottom and pasta on top.  It’s perfect!  I am happy again and I think this dish is a metaphor for our trip so far and oh boy the kids will like it and it will be an original.  YIPEE!  I’ve learned something!  I can also BLOG about it.  I can feel the glow of satisfaction spur me into action.

Then the cheese sauce: Make a white sauce for the pasta.  Basically, two tablespoons each of flour and butter.  Stir in 2 cups 2% milk (I had hoped it was skim, but it’s not).  Stir till smooth.  Turns out I have self-rising flour so I hope that doesn’t do weird things to the sauce.  I also have no measuring utensils, so I am eye-balling everything.  Grate in the precious aged Gouda.   Here’s what it looks like: 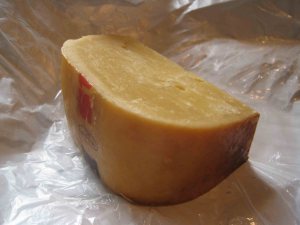 A super old white cheddar or parmesan could be substituted.  Cook the pasta (it’s even “wheat free” for my youngest), mix in the sauce.  Spread the meat sauce in the bottom of the baking dish (mental note to self: DON’T call it “spaghetti” in front of the kids).  Spoon the pasta on top.  Sprinkle remaining cheese, grind fresh pepper over.  Half an hour in a 350-ish (because I had to figure out the oven and it also only speaks Dutch and Celsius) oven and I am happy with the green salad, carrot sticks and pasta dish I put in front of the kids.  I am so pleased with their meals I am tempted to take a picture of that to show you too.

My son tucks in but no one says anything.  Even with my little prompts of “mmm…this turned out better than I thought!”   Finally, I abandon all my dignity and ask “do you like it?”  Lukewarm response.  Not satisfying whatsoever.  Then my daughter finds a piece of tomato.  It’s over.  I give up.  I use the “s” word (no, not THAT one)…and my daughter says “I know!  It’s NOT spaghetti.”  They get strawberries and chocolate chip cookies they made yesterday (another reason for the cleaning this morning) for dessert.

Today I HATE cooking for kids.  My girlfriends would have liked this.  I bet their kids would have liked it.  And at least some of them would have said something nice about it.  I don’t want to think what lovely food my husband is eating right now in some nice restaurant.  I am remembering how he had offered to take me to a Micheline rated restaurant in Copenhagen last week and I’d said “It’s too expensive.”  If I’d said yes at the least the memory of that would keep me company tonight and chase away any current feelings of…?

1 Response to A Recipe for Comfort Food: Dutch/Italian Style