Lessons Happen When You’re Not Looking for Them

Yesterday, we went to the neighboring small town of Apeldoorn to visit the Dutch summer palace of many “William of Oranges” (for me) and to see “Apenheul” (for the kids) – an open air zoo for all kinds of primates.  We had a lovely time and it was a great outing for us and lots of Dutch families on a sunny Sunday afternoon.  Driving through the town I noticed a large memorial with Dutch and Canadian flags.  Trying to find our way to Apeldoorn’s weekly market for our produce needs, we happened to drive down “Canadalaan” (listening to GPS lady try to say THAT was quite hilarious).  That’s curious!  Why the prominence of Canadians?  And Apeldoorn and Arnhem are not places foreign tourists come.  We wouldn’t have…we’re here because the home exchange was “close enough” to where my husband was doing work.

I am not a WW2 history buff.  But I do like history, and I do like political strategy.  So maybe I’m a little more inclined than most people to be interested in WW2.  Arnhem and the surrounding areas are different from all other parts of Europe we’ve been to.  It’s defined more by its 20th century history than anything else.  And as a North American, I have some affinity with that.

One of the first things I was made aware of in Arnhem was that a critical WW2 battle was fought here in 1944 and 7000 out of 10000 Allied troops (mostly British) were killed or taken prisoner during the Allies’ attempts to get to the nearby German border and end the war quickly.  Combined with what I had seen fleetingly from the car window in Apeldoorn, I got curious.  What I learned is the subject of this blog.

The citizens of Arnhem and other Dutch communities suffered too.  They had to be evacuated from their homes and at the end of the war, they had little to come home to.  In the end, the pretty and prosperous city of Arnhem was razed and only 150 homes remained standing in 1945.  Today, I can see Arnhem takes pride in its attractiveness.  It’s known for its greenery and parkland.  “De Hoge Veluwe” national park is a few kilometers away and contains the Kroller-Muller Museum which houses the most important collection of Van Gogh outside of the Rijksmuseum in Amsterdam.  In the city proper, all the post-1945 rebuilding is a mixture of traditional and modern.  It’s appealing. 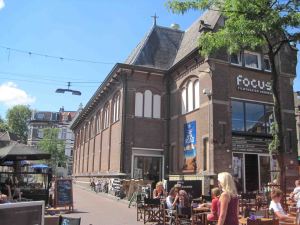 And it’s interesting to me that here we are in 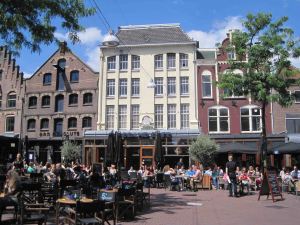 a town so close to a border that was so strenuously fought over, protected and guarded and today is a non-event to cross.  And yet it’s still there.  Here’s an example…A local person in the neighborhood was reminding us that if we left the house we should roll down the windows’ metal shutters, especially at night.  He said there had been two break-ins to the house.  It’s because, and I quote, “the criminals come over from Germany and break in and then go back”.  Really?  You can say with all confidence that petty crime in this area is the result of Germans ‘coming over’?

Warning: Only read on further if you are interested in Canadian soldiers’ contributions toWW2 in the Netherlands…

Imagine you are living under German occupation.  You live in north eastern Holland only a few kilometers from the German border.  Your home town is pretty much the front line of the war in Europe.  In Arnhem on the 17th of September 1944, the air raid sirens went off at 9am.  In the small and apparently pretty city that was described as “The Hague of the East”, you do what you can to find safety.   You have to go quickly, because the Allies have surprised the Germans and the sounds of battle are already around you.

On that morning, thousands of paratroopers descended from the sky by parachute or glider around Arnhem, and up to 150 km behind enemy lines. Their goal: to secure bridges across the rivers in Holland so that the Allied army could advance rapidly northwards and turn right into the lowlands of Germany, thereby skirting around the German defense line – the notorious Siegfried line.  Had things gone better for the Allies during this battle…if fog in England hadn’t delayed the airlifts of supplies to the troops, if commanders had paid better attention to Dutch resistance information that German Panzer tanks were in Arnhem, if supplies had got to the troops instead of falling into German hands most of the time, if, if if…”

Operation “Market Garden” could have ended the war by Christmas 1944.  That was the hope.  Arnhem’s bridge across the Rhine was the key to the plan’s success.  But the bridge at Arnhem proved to be ‘a bridge too far’.  After ten days of bitter fighting the operation ended with the evacuation of the remainder of the 1st British Airborne Division from the Arnhem area.  In the space of ten days, almost three quarters of the 10,000 men fighting for the Allies were killed or taken prisoner.  But it was the last defeat the Allies would experience of WW2.

The war in Europe’s front line remained in the Arnhem area for the next five months, necessitating the permanent evacuation of its civilians to the German-occupied western part of the country.  There, a German blockade cut off food and fuel shipments from the farm areas in northeastern Holland to punish the Dutch resistance.  Instead of celebrating the end of the war that Christmas, the citizens of Arnhem and other Dutch refugees fought to survive on their 320 calories a day ration.  That proved impossible for 30,000 Dutch civilians, who died of starvation or disease related to malnutrition before spring of 1945.

Why is there a monument in Apeldoorn?

I imagine there are monuments to Canadian soldiers all over this part of the Netherlands.  I just haven’t been looking.

It would be May of 1945 before all of Holland was liberated.   The role of Canadian troops in 1945 was to liberate the western Netherlands and establish a supply route through Arnhem and Apeldoorn to support 2nd British Army’s advance into Germany.  In their liberation of the western Netherlands, Canadians air lifted food to starving families.  Many Dutch painted “Thank you Canadians!” on their rooftops in appreciation to the pilots.  Have you ever wondered why Parliament Hill always has so many tulips in the spring?  The government of Holland has donated 10,000 bulbs to Ottawa annually since the end of the war.

From the National Canadian Liberation Memorial at Apeldoorn:

“CANADA BROUGHT LIBERTY AND LIFE TO THE NETHERLANDS AT THE END OF THE SECOND WORLD WAR. BETWEEN OCTOBER 1944 AND MAY 1945, WITH FIERCE FIGHTING AND HEAVY LOSS OF LIFE, THE CANADIAN MILITARY OPENED THE SCHELDT ESTUARY AND THE PORT OF ANTWERP TO ALLIED SUPPLIES, CLEARED MUCH OF THE COUNTRY OF THE ENEMY, AND FED DUTCH PEOPLE LEFT STARVING BY THE NAZI OCCUPIER. ON MAY 5, 1945 IN WAGENINGEN, THE GERMANS SURRENDERED TO CANADIAN LIEUTENANT-GENERAL CHARLES FOULKES AND H.R.H. PRINCE BERNHARD OF THE NETHERLANDS, COMMANDER OF THE DUTCH ARMED FORCES. THE BONDS OF FRIENDSHIP FORGED BETWEEN CANADA AND THE NETHERLANDS STAND STRONG TO THIS DAY.”

In creating the necessary supply route, many Canadians died.  Similar to many other towns in this part of Holland, the liberation of Apeldoorn was carried out by twelve regiments of the First Canadian Army.  Private James Walter Walford, from the Saskatoon Light Infantry, and my home town, is buried at the Groesbeek Canadian War Cemetery a few kilometers away.  He’s there with 2337 other Canadian soldiers who were killed liberating the citizens of France and Belgium starting in September 1944 and ending in this part of the Netherlands in April 1945.

Private Walford died on April 12, 1945 while liberating the Netherlands days before the war ended.   If he’d made it until the end of the offensive on April 17, he probably would have gone back to Saskatoon and his family, and lived his life.  But it didn’t work out for him.  So I am going to his grave to pay my respects, and I am taking my family with me.

So what I’ve learned?  Besides a little history?  Maybe the important parts of our three month trip are NOT the tourist destinations.  They’re the places I didn’t expect to go.  Like Apeldoorn. Like Groesbeek’s War Cemetery that is still tended by Dutch school children.

Or maybe I re-learned that Canadians are great.  Last night I had the opportunity to eat out with my husband at one of Arnhem’s finer eateries along the Rhine.  Such good food and so pretty!  While there I was lamenting “How will we go back to Canada and live there?”  “What have we got that’s great?”  “It’s a backwater!!”  Now before anyone tries to revoke my Canadian citizenship, you have to acknowledge we are not titans of art and culture like Europeans are.  Nor are we necessarily titans of business like our neighbors to the south of us.  That’s ok (maybe).

But we are good people.  We are very good people.  The young men and women who go fight for us around the world are a testament to that.  I read several first-hand accounts of what these men found in Holland in 1945.  Men who were hardened by years of front-line fighting and deprivation.  They were horrified by the emaciation and hunger in the eyes of Dutch children.  They gave away their cans of beans that they were warming for their own dinner.  The Canadians actually stopped advancing through western Holland at one point because they were concerned for the well being of the refugees.  The Germans had decided to blow up the dykes to flood the communities and drown the Dutch refugees.  I looked at photos of entire communities engulfed in water and all you could see was the spire of the local church.  Every thing and everyone was under water.

Canadian soldiers were put in the position as the liberators of the Dutch people and every generation of Canadians should always be very, very proud of that privilege.  I am.

*”A Bridge Too Far”, 1977, directed by Richard Attenborough.  It starred James Caan, Michael Caine, Sean Connery, Anthony Hopkins, Ryan O’Neal, Robert Redford and Elliott Gould and is based on the 1974 book (same title) by Cornelius Ryan.

Also, a 1946 film “Theirs is the Glory” is a British documentary film about the battle at Arnhem and the men who fought at Arnhem star in the movie.