The OTHER end of my foodie spectrum!

“It’s in the Palais Coburg…it’s supposed to be right here,” says my husband, looking around with map in hand.  We’re in a quiet, non-commercial part of Vienna, with few people on the street in the early evening.  The only place seems to be a high rise residence of some kind and I can see through the glass front doors that there’s a concierge all by himself in a fancy room. “Let’s ask him for directions.” I suggest.

We are keen to find our destination; we feel lucky to have secured a reservation at the two star Michelin restaurant “Sylvio Nikol”.  Last year he had one star, so after careful research I chose “him” for us to blow our travel budget on, since he sounds like an up-and-comer.  No resting on his laurels like the bakers at the Hotel Sacher.

“Ah,” the concierge smiles, “Welcome!  The restaurant is just upstairs and I can show you the way”.  Our elevator whisks us upstairs to another smiling young man in a black suit.  We are summoned past a glass wall of what looks like 45 different kinds of wine glasses, past the outdoor terrace and a few other smallish rooms,  to a medium-sized dining room.  If I could have gracefully stood at the threshold and stared, I would have. But I don’t, because I’m acting cool and pretending I frequent this kind of restaurant. The wall at the end of the room is the glittering inside of an eight foot tall amethyst geode.  It’s stunning.  “My twelve year old would love to see this,” I think.  We are shown to our large round table with our backs to a glass wall so we can take in the ambience of the room, side by side.  Between each of the ten or so tables that horseshoe around the long room are large half-egg shaped, gleaming white pods, flat sides up, with tiny but powerful lights bouncing off them, producing a sense of privacy and the perfect, low light ambience to this hushed, lush temple to refined living. 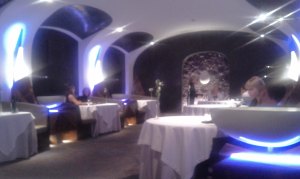 Another young man in another black suit welcomes us in perfect English, makes appropriate light conversation, and announces the first “amuse buche” that arrives while we are talking like old friends.    After suggesting and agreeing on some aperitifs, our second “amuse buche” arrives with the drinks.  Presented on a granite rock with holes drilled into it, are spikes holding two round, white, pearl “pickles” to be dipped into tiny holes of dip.  I can’t begin to tell you how delicious these things are.

After a relaxing period of time our sommelier shows up to discuss wine.  Would we like to see the “regular” wine list or the “rare wines” list?  The regular wine list is about the size of a large atlas and easily had a thousand wines on it from all important wine regions of the world.  There were wines older than my country.  Several wines were bottled in the mid 1800’s.  After amusing himself by looking through it, my husband relinquishes the list and gives the sommelier a price range and describes the kind of wine we like.  It was fantastic.  My curiosity gets the better of me and I ask our sommelier how a new-ish restaurant assembles such an amazing collection of wines.  Apparently wine dealers can find these wines, plus the owner of the hotel sends emissaries to Sotheby’s to buy up cases on auction from old estates.  “That would be a fun job,” I think.  Before the wine is given to my husband to try, both our head waiter and the sommelier had small sips to make sure they thought it was ok.  They weren’t going to serve it to him if there was a chance it wasn’t up to standard.

As more couples entered and ordered we noticed that no matter what language the clientele spoke, there seemed to be a young man in a black suit who spoke it fluently. Our fellow diners are an interesting group.  Except for one group of three, we’re all couples.  It’s hard not to make up a story about a 20-something couple across the room from us.  A Paris Hilton clone in a sleeveless black dress and $1000 Swarovski evening bag plopped on their table obviously knows the staff and has ordered off a menu.  This restaurant is not for the financially faint of heart so their youth stands out in our room of middle-aged-ness.

We didn’t order off the menu – we never saw one.  I think we were still reeling from the wine list.  At our head waiter’s suggestion, the chef put together six (for me) and eight (for my husband) courses.  You can’t order less than five and no more than 12.  And it is only at this point that the issue of price was raised.  The waiter breathed the cost, head tilted, suggesting slight concern that this might disturb the intimate camaraderie that had been created over the past thirty or so minutes.  My husband gave the appropriate smile and nod, while I thought, “Who are we kidding? My cool act isn’t working, they can tell we never eat in this sort of restaurant.”

But I don’t spend much time thinking about it because I am busy eating… for three and half hours.  In many years of being together, I have never known my husband to enjoy being in a restaurant longer than two hours.  But tonight he’s not complaining.  Between all the amuse buches and courses ordered, we had between fifteen and seventeen things to eat, in between our sips of wine.  Each course had a name…”the river”…”the forest”  And each was a culinary masterpiece and delight. 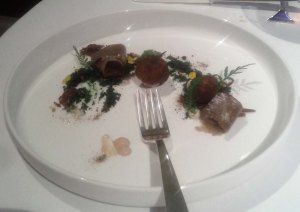 “The forest” for example, was a mixture of pate fois gras, tiny ferns, fine shavings of dark chocolate and some other tastes of obscure origin.  It wasn’t obvious what we were eating because, as the photo shows, it looked like toadstools growing from a mossy, dark earthed forest floor.  But the combination of tastes!  Even the tiny breads that accompanied the early courses were amazing.  First was a deliciously crunchy and salty roll that was like a brioche on the inside.  With a different course, it was soft outside with a sweeter dough…it was hard to keep track but I think there were four different kinds of bread before I realized I wasn’t going to make it to the end if I kept eating them.

And each course appeared quietly and seamlessly.  In between each course a white-gloved, black suited young woman came and whisked crumbs away, changed cutlery for the next course, and occasionally filled our water cups.  When a course was being served or taken away, a different young woman would approach the table with a large tray.  Two waiters would appear simultaneously to place or take away the dishes in front of us.  And each course was not on just a dish.  I mentioned the rock…another course was served in half a glass coke bottle and every shape and size of plate in between. 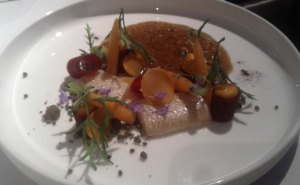 The bill was a ridiculous amount to spend on a meal, but this was much more than food.  The last time we ate in a Michelin restaurant was thirteen years ago and it still gets talked about.  Travelling is about the experiences you have and the memories you create.  Our “Michelin meal” in Vienna will last far longer than three and a half hours.

And I have learned what I couldn’t know in my 20’s.  Being in Vienna as a young person was almost a “nose pressed against the glass looking in” experience for me.  It’s nicer, I think, to be in a city like Vienna and have enough of a budget to pick and choose what,  from the wide array of refined possibilities that Vienna offers, is worth the money.  For someone like me who enjoys really good food, a michelin-rated restaurant is worth the money…occasionally!

2 responses to “The OTHER end of my foodie spectrum!”