Back to School, Stockholm Style 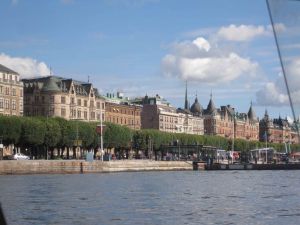 All over the world, children are engaged in back-to-school activities.  Often with a parent leading the charge, usually their mother.  They are having teeth checked, getting hair cut, and being sized up for what shoes, pants and shirts fit after a summer of growing.  We engaged in an intense day of this in Stockholm.

I think everyone knows this is where Ikea was born.  Maybe you know, but I didn’t, that H&M is a Swedish company.  The Swedes seem to have figured out this back-to-school, mother and child provisioning “thing”.  There are several store chains that combine kids with ladies clothes.  Unlike our home town, we had several stores to choose from where my kids, who are into the top end of kid sizes and even into the “extra small” (with prices to match) of adult labels, could find some new kid-priced duds.  Our very helpful front desk person at our hotel sent us off to “Lindex” first.  Our bus let us off at the front door and we didn’t emerge for almost two hours while I fetched and ferried various sizes and styles to and from a pair of change rooms.

On this day I also chose to raise the topic of a hair cut with my twelve year old daughter.  Getting her hair cut is a negotiation that my days of public sector union bargaining have prepared me well for.  There are times I miss my career and think I am “wasting” an expensive education on a couple of pre-teens and a suburban household.  But this is not one of them.  I am up to this challenge of getting her hair cut.  So while the first blush of new clothes happiness is on her face, I gently raise the possibility of getting her hair cut while we’re in Stockholm.  “People here speak excellent English and you’ll have a better chance of getting the hair cut you want here rather than in the Netherlands.”  Ever since my daughter could speak, my husband and I have known the key to parenting her is to give her options.  At bedtime it was NEVER “it’s time to go to bed,  because that would invite an argument.  No…it was “It’s bedtime.  Do you want to wear the purple pj’s or the blue ones?”  As a preschooler, it was “Look, this is going to happen.  Do you want it to be the easy way or the hard way?”  I explain her hair cut is either the easy way (Sweden) or the hard way (Rotterdam-where we’re going after Stockholm).  It is not over yet and it’s going to take several days of intense bargaining. 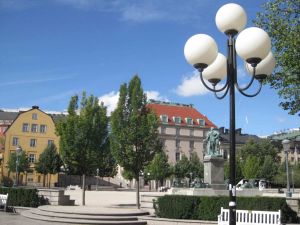 So while the topic of hair cuts was gently simmering on her psychological back burner, we set out to explore Stockholm.  We had the luxury of good friends acting as tour guides, which ended up being somewhat ironic as it made us less like tourists.  We all spent good money on a boat equivalent of a bus tour, with a pretty good accompanying audio guide.  But you can’t have a conversation with headphones on so after a few minutes, we all gave up and tossed the headsets.  Instead of Swedish history I learned “here’s where we used to live.”  “This is where I go running.”  “That’s where my grandfather ran a bank.” Which was much more meaningful but it’s like we were the “anti-tourists” in Stockholm.  We saw lots of stuff, but didn’t look carefully.  My girlfriend took us to Skansen, a lovely open air Swedish museum.  All my kids cared about were the Swedish animals; I think the only historical building we went in was the bakery! So I can’t tell you much about Stockholm’s history.  I do know it is situated on an archipelago of islands but my husband and I diverge on whether it’s Sweden or Stockholm that consists of 30,000 islands.  We weren’t very good students! 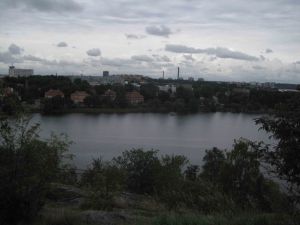 But we were social.  Some fun diner parties.  Swedes speak excellent English.  Because English is taught in schools from grade one, and because pop culture coming into the country is not dubbed or translated as it is in Italy or France, Swedes understand English metaphors, turns of phrase and idioms.  After two months of few real conversation partners, I was extremely grateful to be able to laugh and share jokes with someone other than my husband.  Oh, that didn’t come out as I intended!  He has a good sense of humour, but two months of only one person can get a little….predictable?

And Stockholm is a very easy place for me to feel comfortable.  Admittedly it wasn’t my first trip to Stockholm, but anyone from the pacific northwest (esp. Seattle, WA and Vancouver, BC) would feel comfortable.  First there’s the weather.  Proximity to and abundance of water.  Similar attitudes toward fitness and an outdoors orientation to life.  And as a tourist, getting around is easy.  Helpful people in some sort of official capacity are at many metro and bus stops so there’s no emerging from an underground station as we did in Milan and then having no clue which direction to walk in.  This was significant in Milan’s 32 degree heat, but only significant when Stockholm’s skies were pelting rain.  (Oh, that felt so familiar!)  Sweden has lots of space relative to its population, so just standing or walking in the city has a familiar feel for a North American used to a metropolitan city.  If you ever visit Stockholm, it would be hard to imagine having a bad time; it’s a great city full of friendly people.  But if you visit, bring lots of money…like Copenhagen, things are expensive.  A casual family-style meal for four, very average food, will set you back $100-$120 Cdn. 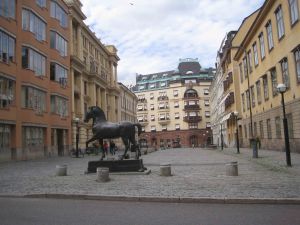 p.s. the haircut happened the morning we left and my daughter’s comment when she left the salon was “Darn!  Finally I find someone I like to cut my hair and she’s in Stockholm!  Sigh.”  All is calm on the family front as we pack our bags for our sixth visit through Schipol Airport in Amsterdam.  I think I know it better than my home town airport!

6 Responses to Back to School, Stockholm Style