Posted on September 3, 2012 by carmengfarrell

I plod behind my husband dragging my two suitcases, clack, clack, clacking over the endless tiled hallways of Schipol Airport in Amsterdam.    I feel I am in that children’s book “Make Way for Ducklings” with the row of ducks that trod across the urban streets of Boston circa 1961.  Well, not quite.  My husband doesn’t like walking ahead of me, but I explain one of us (me) needs to take up the rear to make sure the youngest offspring stays caught up and on task while dragging his share of suitcase down the “departure” hallways of the airport.  There is so much to distract him it’s hard for me not to feel like a mother duck shepherding her ducklings over the international tiles of airport-ness that is Schipol.  I have come to know it so well this year.  There’s the mid grey of the check in counters of SAS and KLM.  The glitzy black and sparkly tiles where the diamond merchants and high end retailers attempt to entice travelers to spend their last euros.  The chocolate shop where we’ve stopped more than once to buy a hunk of Belgian chocolate…why?  I have no idea.  It’s hard not to feel reflective about the amount of time I’ve spent in this airport since June 12th of this year.

I have a special relationship with the international airport in Amsterdam.  An earlier version of the largest airport In Europe was my introduction to international airports in 1976 at the tender age of eleven…without my parents.  It was then I learned of horizontal escalators you walk along to reduce the time of getting from gate to gate.  I plod along on those too on this trip.  And I am grateful for them.

In June we staggered off the KLM flight from Vancouver, looking for our connecting flight to Milan.  In the fog of jet lag, no sleep for 24 hours, I try to help my husband find our gate.  “Oh look! I say.  Our flight to Milan is only 29 minutes!”  My foggy brain was clearly not doing math properly because if I’d thought about it I would have realized it wasn’t possible to fly that far in half an hour.

Unaware of what that sign really meant, my husband decided to wait in a slow line to exchange some Canadian cash for euros.  THEN we discovered that sign was merely informing us how long it would take to clear customs and traverse the airport to get to our gate.  Twenty-nine minutes!!!  Moving as fast as possible amongst thousands of travelers moving in all directions, I kept staring at the tile at the end of our duckling-ish line of family to avoid staring daggers into someone’s slow moving back.  (Remember I am sleep-deprived and therefore not responsible for any of my moods….or so I think).  But this part of the travel saga ended happily.  Schipol is efficient in every sense of the word.  We got on our flight, arrived in Milan and continued to stay awake until the neighborhood restaurants opened at 7pm (again, trying not to feel resentful about the world not accommodating my lack of sleep) so the kids could have their first “real” Italian pizza.

But little did I know what peace that would seem in comparison to DEPARTING MILAN.  OMGosh.  The alarm goes off at 4 am.  It’s pitch black but still 31 degrees inside and out.   Things go ok until the suitcases and family members are assembled on the sidewalk in the dark. We are in a residential neighborhood outside our friend’s apartment building.  No tourist centre with 24/7 taxi service.  Also remember…this is the land of limited internet, no phones and no English to speak of (ha, ha).  A taxi can’t be preordered so my husband’s first task of the morning was to order a “large” taxi to accommodate four people and eight bags.  He gets some recorded Italian voice telling him to do something so he randomly pushes a button to get a person.  But she doesn’t speak much English and my husband’s Italian is limited to gelato and grazzi.  By the time he gets off the phone he’s not confident the taxi is coming.  This is confirmed on the sidewalk at 4:30 when timing becomes critical and he decides to try and find one at the taxi stand down the street.  He asks a driver to go back to his wife and son, at the wrong end of a one-way street, with the bags and take them to central station where the airport bus leaves.  Because the taxi will be too small, he and my daughter start jogging to central station (plan B).  During the entire fifteen minute run, he keeps an eye out for me to pass by in a taxi.  But I never do.

This is because I am STILL standing on the street, watching with increasing anxiety and fallen hopes for the promised taxi.  When that becomes unbearable, I leave my son in the dark with the bags and head off down the street to flag down another driver.  This is not easy.  There are none.  After a very long ten minutes…and about five minutes before the bus is scheduled to leave the station… I convince someone to come.  He does.  But then he blanches at the mound of bags.  I plead with him to please, please take us and I physically start hauling the bags and showing him how they can fit in the back of his car and on the seat.  He’s not happy, but he can see I’m desperate.  I have that look on my face.  So we pile in his taxi and careen to the station, cruise past all the idling airport buses and pull in.  There is no sign of the rest of my family.  But we unload the bags, and in my gratitude I give our driver the best tip he’ll see all week.  As we’re gathering the bags I see my daughter running towards me!  It’s like she’s running in slow motion and the soundtrack is mounting behind her…in slow motion I run toward her with my arms outstretched.  My husband is in the background gathering the bags toward the bus.  I have never been so happy to see anyone in my life.  And climbing on that bus I have never been more happy, a feeling which I need to savour  in order to prepare myself for Milan’s Malpensa airport.

OMGosh again…1,000 times!  I think Malpensa must be Milan’s budget airport.  We are on an ”Easy Jet” flight to Copenhagen.  You know, another one of those new budget airlines with rates lower than your average café lunch in any European city.  There’s a reason.   There’s NOTHING “easy” about it. 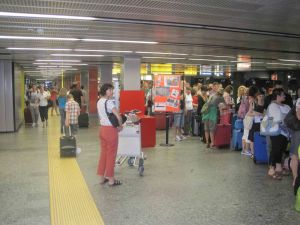 Towing our train of bags, the sliding doors of Malpensa open to a seething mass of similarly cheap-minded people.  This is not good.  They all need to get places, and, like us, they all got up at the crack of dawn to get some ridiculously-early flight to some god-forsaken destination that seemed like a good idea when they bought it over the internet.  No one is in a good mood, and no one is budging an inch. There is no visible organization to the endless, unorganized mob of growly, suitcase toting travelers.  We nearly lose our youngest in the melee.

There is nothing pleasing about the place.  The airline’s colours are loud, and everywhere.  The ceilings are low and festooned with drooping electrical wires.  The tiled floors, if you can see them, are grimy and the staff are short-tempered and not in a mood to please.  In order to get to the gate, at least three LONG line ups are required.  It’s not really clear which line we should be in. 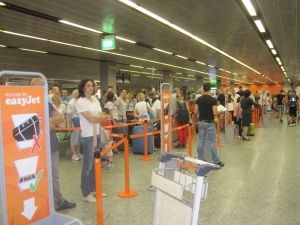 This is not a place for polite queuing either…it’s every person for him or herself and if you hesitate a second, your spot will be taken in line and you will be confronted if you try to reclaim it.  At 6am, stress levels are high at Easy Jet’s Milan terminal.  The screening security staff’s militancy would suit a cold war era blockade.  Getting to the “other side” with duty free shopping and departure gates feels like the Promised Land.  And sinking into our cardboard-comfortable seats on the airplane feels like freedom.

I don’t care or know if I’ll ever be to Malpensa airport again.  I’ll certainly think twice about booking a budget airline flight again.  But I know my relationship with Schipol will go on and on.  I’ve been through that airport seven times this year and still have three more trips to go.  I might not feel great while I’m traversing through it, but it all “works”, it’s efficient, and if you have time to spare, there are a lot of distractions.