Oslo: It will be nice when it’s finished.

Posted on September 8, 2012 by carmengfarrell 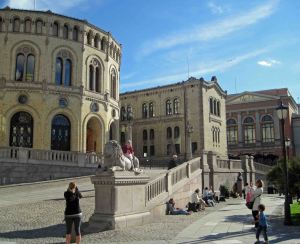 The great age of Vikings.  Norway.  Then Norway/Denmark, then Norway/Sweden.  Then, the same year my home province joined Confederation (1905), an independent Norway.  I’ve spent a lot of time in Scandinavia this year and feel safe telling you that economically,  Norway is the Alberta of Canada.  Or perhaps the Texas of the States.  Off-shore oil and gas exploration in the 1970’s has turned Norway into a prosperous, booming place.  The only other place in Europe I’ve seen close to so many construction cranes this summer has been Vienna.  The city of Oslo gives off a feeling of prosperity, of a growing place, of construction and excavation on many downtown street corners.  It’s hard to get a decent “tourist” camera shot without piles of dug up road, yellow plastic barricades, or metal cranes in it.  It’s so annoying.  Oslo: it will be nice when it’s finished.   And like Budapest, I’d be curious to see it again in twenty years or so.  It will be quite different.

Alongside the traditional, and charming-looking Scandinavian style stone buildings are beautiful modern ones.  Everyone is familiar with the shape of Sydney’s opera house, but you should see Oslo’s.  Designed to resemble an iceberg, the white marble walls and terraces slope down right into the sea.

The area around the opera house is under construction.  A series of unique and striking high rises are emerging out of a former derelict neighborhood.  Named “the bar code”…you can see why.

Another part of downtown is reclaimed waterfront warehouses.

The city is located at the water’s edge of the North Sea and nestled between seven hills.  It’s very scenic.  The Royal Palace is downtown and across the downtown harbour is a former island where the Royal farm produces the royal milk and the royal family also spends its royal summers.  The island is also home to several museums.  With the exception of one, they all pay homage either to the golden age of Vikings or to the continued spirit of maritime exploration in the form of the Fram polar ship and the Thor Heyerdahl‘s  Kon Tiki expeditions.  The former is a Norwegian-designed wooden ship that was the first to withstand the arctic ice cap.  Instead of being crushed by the press of ice, the ship’s round hull allowed it to pop out of the ice like a nut when the arctic winter set in.  From 1892, it still holds the record for the farthest north and farthest south exploration.  And Norwegian Thor  Heyerdahl is a force of nature on his own, setting out on a reed raft in 1947 to float across the pacific ocean to prove his theory of how Polynesia was populated.   The Viking blood still flows in Norwegian veins!  Now they take to the skies in the form of ski jumping and currently hold the world record.  The ski jumps are located on the side of one of Oslo’s seven hills and are so large they can be clearly seen from the other side of Oslo.

I’m sorry we’re leaving without seeing the west coast.  Fjord-filled, mountainous and green, it sounds pretty.  But even better, apparently the food is cheaper there!  One night we were taken out for dinner by a group of my husband’s work colleagues.  It was a beautiful meal in a gorgeous setting, and the chef apparently was on loan from a local Michelin restaurant.  Oh there’s that again!

Those of you who have been reading these blogs regularly will know there was a period in July when I was unhappy about being home alone, in a strange country, with two children who were NOT appreciating my cooking as I thought they should.  You may also recall my husband was “away on business”.  Oh boy.  Now I KNOW.  There is no fooling me.  I know he tries to downplay the lovely meals he has on others’ expense accounts.  Oh no, it was no big deal.  Sure.  Now I don’t believe him anymore.

We were picked up at our hotel by taxi.  Prosecco was served in the bar downstairs while people began praising my husband and each taking credit for various parts of his book that had just been translated into Norwegian.  I smiled and silently sipped my prosecco.  Then we moved upstairs to a 360 degree view of Oslo and seven different wines served with seven courses.

No wonder!  Now all his homecomings from business trips make sense.  Thank goodness he’s got his wife and children to keep him grounded.  We’re all he’s got for his sanity.  And thanks to Oslo I’ve got the scoop on what really goes down on those “terrible” business trips when he’s away from us precious ground-beef eaters….

1 Response to Oslo: It will be nice when it’s finished.