At spring break a great horde of northern,  North America dwellers line up at airports in Canada and the US and board airplanes for Maui, Mazatlan, Cancun, Los Angeles, and Barbados.  We migrate to the southern United States, Hawaii or Mexico.  As fast as our little wallets will take us.  Just for some warmth and sun because we can’t stand any more of our collective local weather.

My family did this at three in the morning the day after our kids finished school.  I reflected that the last time I got up in the middle of the night to get on an airplane was in Milan where I spoke no Italian and had limited capability of securing a taxi for my son and our fourteen and half suitcases to get to Malpensa airport.  Transversing Vancouver International Airport where I speak the language, with fewer bags and a husband and daughter to boot, seemed like the proverbial piece of cake.  My vision of this holiday is a whole lot of nothing with a minority of “adventures”. So far so good.

Judging from the population around me, Canadians love this part of Mexico.  The lovely home we have rented is in a somewhat bizarre development on the beaches of the Pacific Ocean…in the middle of nowhere!!  Named “MusicaDel Mar” it’s true we do hear the pounding surf constantly…easily confused with thunder, except that there are no clouds in the sky so thunder isn’t possible.  Is it?  I only know about rain, so what authority do I have to comment on tropical storms?  Zero.

This is my fifth trip to Mexico.  I’ve not had this experience of Mexico before.  Acapulco, Zhuiatinaho, Mazatlan, Cancun, Puerto Vallarta, Sayulita, Mexico City….are nothing like this.  Well maybe Sayulita is a bit like this.  Our development which was the brainchild of three gentlemen from British Columbia, Canada who own the three beachfront villas, is perched in the middle of sand. 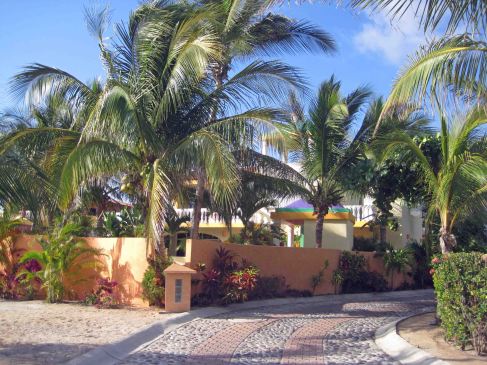 Way, way down the beach is a condominium development and even further in the other direction is a five star hotel complex with a 27 hole golf course et cetera, et cetera.

That’s it.  Across the road from us is Mexican bushland and the odd grass roofed, cinderblock “hut” with a dirt yard enclosure and various animals roaming through it.  Whoever bought the first lots here took a great leap of faith, in my opinion.  But people from Regina, Saskatchewan (my home province), Summerland and White Rock, British Columbia took up the challenge.  Within the brightly painted walls of “Musica”, are about forty luxury retirement homes for Canadians.  It has a surreal quality to it.

But clearly there are lots more of them around somewhere.  When we rouse ourselves from poolside and slather on more 50 spf and clothing, we venture into towns with names like Colimillia, Melaque, La Manzanilla, and Cihuatalan and encounter Canadians at neighbouring tables.  I can tell by their “accent”.  And a bit by how they’re dressed.  In comparison, yesterday at the beach at La Manzanilla, I knew our restaurant table neighbours were American.  There were four couples of late 50-somethings traveling together.  They were deeply tanned, familiar with the waitress, had a cooler deep with cervezas going on, Texan-styled beach hats, jewelry to match the bathing suits, with deep booming voices.  Even the women.  They were having fun, in a non-obnoxious way, and didn’t mind advertising that.  They just weren’t Canadian and it was easy to figure out right away.  The Canadians seem to find each other.  At a great coffee shop this morning more grey haired people started up a conversation with me and I wasn’t at all surprised to hear they’re from Vernon, British Columbia and their grandchildren live in my neighbourhood.

Ontario and British Columbia license plates are not uncommon sights on the dirt roads through these one-horse towns.  The “Super Hawaii” corner store in Melaque caters to what Canadians like, and brand names like “Kirkland” are common.  It’s quite weird being confronted with so much “Canada” in the face of third world Mexico.  I’ve never been in a place outside of Canada where the existence of Canadians is so obvious; it’s incongruous to see third world sights with so many grey haired Canadians sauntering through it, and speaking Spanish like the locals.

This entry was posted in Uncategorized. Bookmark the permalink.