Boston: It Could Still be a Great Canadian City

Boston. It should be part of Canada. I don’t think Bostonians would really mind. They like hockey. They have snow. They use “sorry” like we do. They’d assimilate quickly.

Have you ever noticed that? To me, “sorry” should be reserved for when an apology is required. A real apology…one that conveys sincere regret, an intention to do better, and an acknowledgement of what was “wrong”. But in addition to apologies, Canadians use “sorry” to get attention and to avert a problem. So do Bostonians!

A stranger bumps into us on the street. “Sorry”. A stranger asks us for the time, “Sorry [for disturbing you], could you tell me the time?” At a busy attraction, the kids adjust their positions such that it looks like we’re going to leave…a Bostonian moves in to see if the spot is available then apologized when she learned we weren’t leaving. In the middle of an in depth “family” discussion on the street where we were in someone’s way…”Sorry…can you move please?”[when we were in the wrong, but trying to avoid a potential conflict with us] 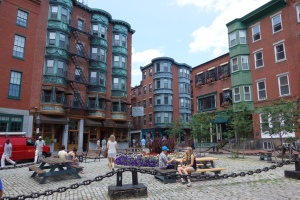 I think we’d become even more polite if Boston were part of Canada. We’d learn to say thank you for everything…a door held open, a space made open in a busy venue. I think we’d be less aggressive drivers, too. And if we saw anyone standing on our city’s streets staring quizzically at an open map, we’d learn to always ask them if we could help them figure out where they were going. And if a child was arguing loudly in public for more gum we’d offer him some of ours. And we’d always tell each other “Have a good one!!”

And really, if events had unfolded a little more positively, we wouldn’t have let Boston get away. Actually Boston could be responsible for the beginnings of the Hudson’s Bay Company. Yes, really. Back in the late 1600’s, the French had a monopoly on the Canadian fur trade. But there were a couple of entrepreneurial voyageurs, Radisson and Groseilliers who for some reason, really, really wanted to trade furs in Hudson’s Bay.

I don’t know why, but they went to a well-heeled group of business types in Boston who agreed with them that the future was in Hudson’s Bay furs. Go figure. In 1663, the expedition set out with the backing of Boston money. Unfortunately the speculative venture ran into ice pack in Hudson Strait. So that all ended, but it caught the attention of the Boston-based English Commissioner George Cartwright, who brought the two to England for more financing…which eventually led to King Charles granting the Hudson’s Bay Charter in 1670 and lots more exploring. 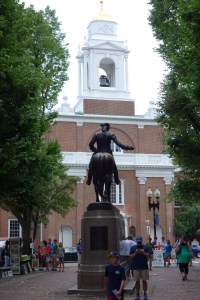 So, we Canadians and Bostonians have shared history and if they could just work a little HBC history into their own fabulous “Freedom Trail”, our historical ties would be set. Boston has this great red brick trail through the downtown core that we’d all like. With the audio guide downloaded into your mobile device you can join the throngs of other tourists who tramp along the 2.4 mile trail from Boston Common, learning about the events leading up to and following the War for Independence.

Plus, with annexation, we’d have access to Boston Cream Pie. I know, we’d get Parker House rolls and Clam Chowder as well but it’s dessert that really matters in life. We need a national dessert and I think this is it. It isn’t really pie…it’s white sponge cake with vanilla custard between the layers and chocolate glaze over top. I dragged the family to the origins of “The Pie” , so you can see its current-day incarnation. 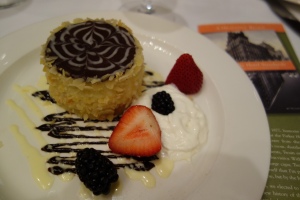 The hotel has a colourful history…take the story of how the Parker House roll was invented…there are a few variations, but they all involve an angry pastry cook throwing unfinished rolls into the oven, which created their dented appearance. 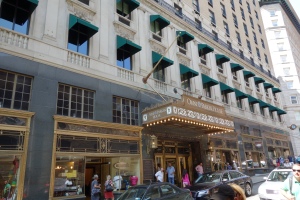 JFK announced his candidacy for Congress there and his friends threw his bachelor party there. Ho Chi Minh was a baker and Malcolm X was a busboy. If those walls could talk!!!

Boston. We could use another nice city on the East Coast. I think we should annex it.