Was Ghandi’s pocket watch a useful tool or a rare favourite posession?

Soft and thin.  Airy.  Yet warm.  A shield when needed.  Shade sometimes.  It changes my mood.  And it’s traveled the world.  It can make a t shirt and pants feel more special.  Occasionally it’s a pillow or a blanket.  It’s one of my favourite things.

What’s yours?  It could be a sweater or a t shirt that has seen better days.  It’s not perfect anymore.  But that makes it more endearing.  It has been places with you.  There are memories attached.  It’s comfort.  That thing of yours that will eventually wear out and when you have to part with it, it will be sad.

My pink scarf was a gift.  I don’t know where it came from, except from the hands of a friend.  So that makes it special from the start.  Looking at it I know it wasn’t made in Canada.  But it’s having an interesting life…for a scarf.  Where is it from?  Have I brought it “home” without knowing it?  In countries where my gender is covered head to toe in a burka, it was a shield for my pale skin and blonde hair.  It’s been a temple scarf and head covering in  Egypt.  In Cambodia it tried to be shade in the 40 degree heat of Angor Wat.  It was a beach cover-up in Thailand.  It’s been crumpled up on long plane rides.  Despite the abuse heaped on it in aircraft cabins, it’s a lucky scarf…Vietnam, Mexico…Peru.  In the spirit of friendship it’s been loaned to other friends for their exotic travels.

Now it’s been to India.  I thought about my scarf in the Ghandi Museum in New Delhi.  The “new” is an important distinction.  “New” means broad leafy boulevards, gracious architecture, parks and not much foot traffic.  “Old” Delhi is medieval in structure…narrow streets, mayhem on the roads, smells, street hawkers, entrepreneurs, shoppers, noises…a cacophony of human experience. 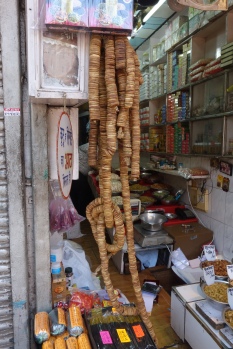 But the Ghandi Museum is quiet.  A display of an extraordinary life in photos, quotes and news clippings.  I see photos of him later in life.  His was a life of simplicity, few belongings, nothing that wasn’t necessary.  Clad in his dhoti, and leather sandals.  His possessions?  A walking stick and a pocket watch.  Was his pocket watch a holdover from his barrister days?  Or was it his “pink scarf”?  Was it his favourite thing, his travelling companion?  Apparently the last words he said before he was fatally shot January 30, 1948 was something to the effect of not wanting to be a minute late for prayers. 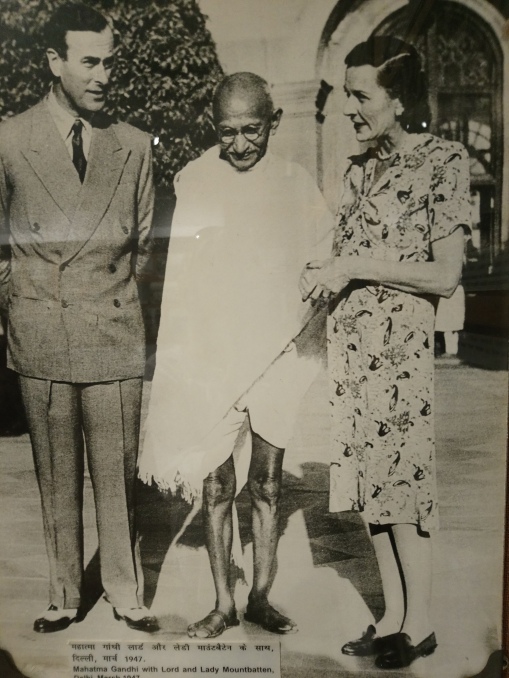 This is hugely ironic in this country.  NOTHING is on time.  Or rather time has a different meaning.  International flights are “on time”, but everything else seems to operate in a window of a couple of hours.  Gervase had bought sim cards for Shannon’s and my phones that weren’t working.  So he wanted to return them.  It’s been two days of trying, but there are no “airtel” company offices open.  A store can say it will be open at 10am, but it can still be shuttered at noon.  Buses and trains can be an hour off their advertised schedule, but that is still considered “on time”.

That does not mean this country is not productive.  By no means.  It’s a very complex place and I will not come close to doing it justice here.  Here are a few things to think about though.  The growth of the economy overall is outpacing that of China’s.  And yet inflation is somewhere between 5 and 6 percent.  We were told that the unemployment rate is 30%.  India’s total population?  1.3 billion people….so more than Canada’s entire population have no jobs!  70% of the population live in rural areas.  Where village homes can have no running water or septic system.

Yet those with an education can do well.  Companies operating on a global scale compete with reputations of offering good service at a good price.  My husband’s website developer is Indian and was hired over the internet.  According to our guide, Indian companies are number two in rocketing satellites into orbit (after the US).

But my scarf cares about none of this.  It is very busy sightseeing….no time for jet lag.  Thank you Marji.

7 responses to “Was Ghandi’s pocket watch a useful tool or a rare favourite posession?”