So the patterns on my scarf are Sanskrit, I learned from my sister-in-law.  And apparently my scarf has “come home”.  A guide told me the writing was about one of the three “main” gods in the Hindu religion Shiva the destroyer…as in the destroyer of bad things.  If you’re wondering, the other two are Rama (the creator) and Vishnu (the protector).  There are many, many more.  Every vehicle has a Ganesh (the God with the man body and elephant head) for good luck.  Our erstwhile driver, Jagbir, has one permanently affixed to his dash, as do many vehicles.  Or they have bits of red and gold hanging from the front grills of their truck cabs, or tied to the handlebars of their vespas.  Apparently, luck is something that’s essential in navigating the roads in this county, which doesn’t surprise me one bit.

The backroads of Rajasthan sometimes look like a fancy goat track.  Or at least that’s what the herds of goats seem to think as we pass by… a sentiment of what are YOU doing here is held in their baleful gazes.  If it’s not goats, it’s sheep, camels, school children, women carrying loads on their heads, a child’s hand her hers, the dust visibly dimming the hem of the often-gorgeous saris.  Their vivid colours and patterns are stunning.  One of the thing’s I’ve had to get used to here, is accepting the fact that oncoming traffic is treated like a constant game of “chicken” with a level of forced calmness.  There is only room for one vehicle, but each comes barrelling head-on down towards the other, goats and people scattering, horns blaring and then at the very last minute, one of the vehicles will allow one set of his (haven’t really seen too many women at the wheel) tyres (that’s how it’s spelled here) to drop into the bumpy track.

Sometimes there’s no pavement at all…just the goat track per se, so the dirt hills and valleys that our tyres barrel over send limbs in the air, knitting needles crashing into the ceiling, followed by our bodies rocking back and forth with a sort of resigned floppiness, or in extreme cases bouncing from seat to seat, seeing as in the back row there are no operable seat belts.  My daughter and I have developed a new level of closeness in our relationship as a result… with accompanying bruises. Our driver, who despite the impression of this description, is a very attentive and caring man who is a very skilled driver, has a good sense of humour. After one leaping fiasco caused me to exclaim “woohoo” he immediately joked back “Indian roads like massage!” 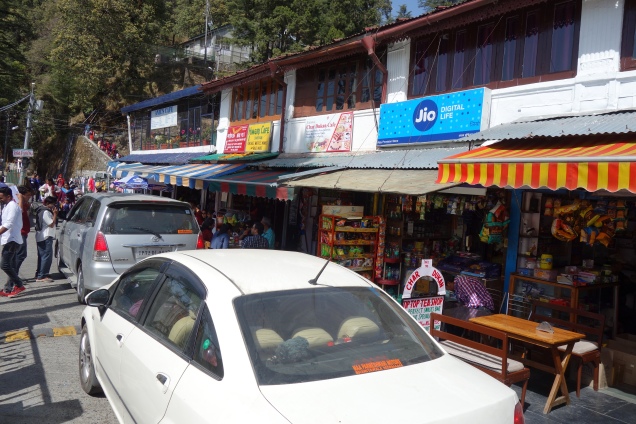 And he’s a competent driver who gets us from place to place with confidence and knowledge.  But I confess that more than once I’ve been grateful for my back-row seat that doesn’t afford a view of absolutely everything.  The photos I posted previously, by the way, look like “highways” to me now.  And they are a smooth. Compared to the back roads, these previously scary highways create a chaotically predictable experience of weaving in and out of traffic and living beings; horn constantly on the go to say “I’m coming”.  “passing on your left”, “move over”, “you can pass now”…or to pedestrians “stay on the side of the road”, or amazingly to dogs, cattle and other livestock “move over”.  If we’re stuck on a narrow street in a town with buildings on each side that wasn’t ever intended for two vehicles…”I’m tired of sitting here for 5 minutes, get going!”  It seems there is an entire complex language of horn honking to which I was previously uninitiated to. I’m amazed how even the sheep are trained to get out of the way.  But the back roads are something else, man.  And my pink scarf has shielded my eyes sometimes when I just couldn’t look at the accident that I was sure was to come…but never has.  Knock on wood though…don’t want to jinx it!  Or thanks to Ganesh.  I don’t know.